In Path of Exile, totems are a type of creature. Totems appear in the game as monsters, and also as allies created by certain skills. Like any other creature, totems have life, and they will be destroyed if their life drops to zero.

Totems do not leave exploitable corpses. Totems cast by players use their skills according to the player’s stats, including modifiers from charges and buffs (like auras) affecting the player. Enough chaos orbs poe is needed in game. 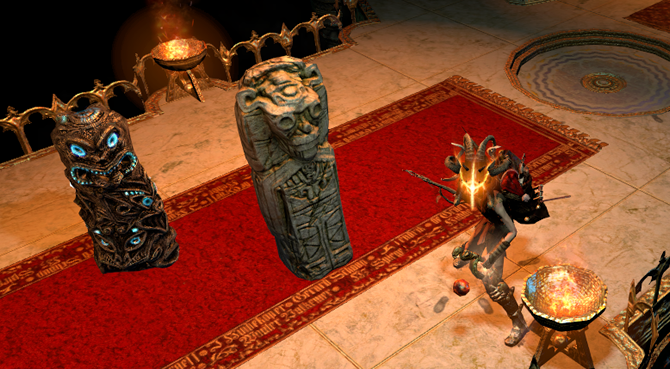 Totems appear in some areas, such as the Ancient Pyramid, and are just like any other monster, except that they usually cannot attack1 or move2. They are commonly found projecting auras that affect nearby monsters.

There are several unique totem monsters, for example Kuduku, the False God (who always appears in The Ledge), Puruna, The Challenger, the boss of Atoll Map and the totem bosses of Olmec’s Sanctum.

Certain skills allow the player to summon a totem ally. Depending on the skill, totem will then attack, cast spells, or project an aura for the player. It will continue to cast until it is destroyed or its duration expires. These skills have the Totem keyword.

The act of summoning a totem can be sped up by increased Totem Placement Speed modifiers. As of version 3.0.0, base totem placement time is 600 milliseconds.

Totems allies are not considered to be minions, and are therefore not affected by minion-specific modifiers such as increased Minion Damage and Minion Instability.

Any auras projected by the totem will affect all of the player’s allies, including minions and party members. Auras and aura-like effects can affect totems (this includes degeneration effects), summoned totems are only affected by auras that affect defensive properties, summoned totems still use their summoner’s skills.

In order for an offensive aura to have an effect, it must affect the summoner, not the totem. If you are new to the game and don’t want to mess up your first build, follow some build guide from https://www.u4gm.com/path-of-exile.